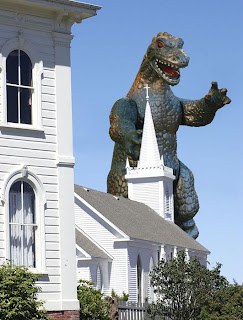 Who's in charge here?
By Abdul Turay
Published Postimees 23 December 2009

The Mayor of London, Boris Johnson, is an eccentric chap. He is from an aristocratic background, earns the equivalent of 2,500,000 kroon a year, is wealthy anyway, but he likes to get about by public transport. As mayor he holds sway over millions of people. He is charge of a budget that runs into billions of pounds, he makes decisions for one of the world's three financial hubs, he's a powerful man.

The mayor of Tallinn you all know. He is runs a city of about 400,000 people with a budget of 700 million kroon. He is by some measure more powerful. In fact even the mayor of a small town like Haapsalu, a man by the name of Urmas Sukles, is more powerful than Boris Johnson. How so? To understand this we have to look at the way local government is run in Estonia

On paper there is nothing usual about local government. By the standards of many countries, Estonia has a remarkably simple system. Many countries have several tiers of local government, and convoluted, centuries-old, system. Sometimes local authorities have overlapping and conflicting responsibilities. Here in Estonia, local government is built on a single tier system.

When the local government system was set up in the 90s, the framers of the system had their eye on membership of the European Union already. Certainly they wanted Estonia to be part of the European family of nations.

The principle behind the Union, written into the founding Treaty of Maastricht, is that things should be run, wherever possible, at a local level. Ordinary citizens should elected local decision-maker to run each village or hamlet. This system is called subsidiarity.

National government can only step in, if things can't be decided at a local level. They have responsibility for defence, border control, national finance, international relations, national education and so forth.

The principles of subsidiarity and decentralisation are written into the Estonian constitution which states:

“All local issues will be resolved and regulated by local authorities, which shall operate independently in accordance with the law.”

The key word is “independently”.

Although each county in Estonia has a governor appointed by and answerable to the Prime Minister, the key decision makers for most things are the local governments.

So if the mayor of Haapsalu decides that all sausages are evil, because he had a stomach bug one morning, and assuming he can get the city government to agree to it, he can ban the sale of all sausages in the town market forever, or at least as long as he is in power; and the national government of the day can do nothing to stop him, without breaking the constitution

Even though all countries in the European Union subscribe to the principle of subsidiarity, in practice many countries find it difficult to apply.

In the United Kingdom with its centuries old way of doing things and unwritten constitution the national government can and do, step in and make decisions that in Estonia would have to be made at a local level.

Boris Johnson couldn't stop the sale of a single sausage. It's outside his remit. The Greater London Authority only has responsibility for transport, police, fire and rescue, development and strategic planning.


The British government could get rid of the of mayor of London altogether if they wanted to, abolishing the office and the the city government. This was done in the 1980s when a right-wing national government scrapped a left-wing local government.

If we want to use a real world example, the city of Tallinn can make people from other parts of the country pay more for buses and trams, and the national government can do nothing about that.

In London the city government was once abolished precisely because it wanted to make people pay LESS for public transport.

Local governments in Estonia have real tax raising powers. As well as it's share of centrally established taxes and allocation from the state budget, the city of Tallinn gets income from loans, the rent or sale city owned property.

The city of Tallinn just approved the budget and as we are all aware, this include a brand new one per cent sales tax to start in June 2010, as well as a tax on boats. Savisaar could if he wanted tax all sorts of things, medicines, foods, clothes, carpets.

He can even intimidate the Prime Minister how he should run his affairs. Earlier this month he suggested he would scrap the one percent sales tax if PM Andrus Ansip lowered VAT by two percentage points.

And what tax raising powers does the mayor of London have. None at all. That's right absolutely zilch. The mayor has a budget and is given money by central government. Local councils in Britain like elsewhere in Europe, and in Estonia, get most of their income from central government allocations. They have very limited tax raising powers they do earn income from a tax on property. It's called council tax and its the only type of tax that's allowed at a local level. The national government can restrict the amount council tax local council can charge. If you don't own property you don't pay.

One foreigner was more angry than Estonians about all this.

“In ANY western country, a local mayor would be politically dead if he ever tried to interfere in the national government policies, ” he wrote on a news forum.

Some have pointed out that what is more shocking is not that Savisaar is dictating terms to the national government, basically blackmailing them, for want of a better word, but that Ansip and the government did not make a big deal out of it.

In any other country there would already be a bill winging it's way through Parliament curtailing the power of the local government.


Of course the principles of decentralisation and subsidiarity are noble ones, but Estonia is a decentralised nation with a too powerful centre.

Tallinn not only gets one third of all states money allocated to local government it also gets four fifth of all direct investment into the country. As far as the outside world is concerned, Tallinn is Estonia.

When the centre is so large, it makes a nonsense of decentralisation.

Foreigners visitors to Estonia are often puzzled by the fact that the leader of the opposition would want to be mayor. With this kind of power, why wouldn't he be? In fact who wouldn't rather be in local politics than in national politics.

So Boris Johnson may run a city of millions, but he can't make them pay more for soap, he can't decide breakfast for them; and he certainly can't bully the Prime Minister. No mayor can do that, except in Estonia it seems.

Tell me, who has more power?