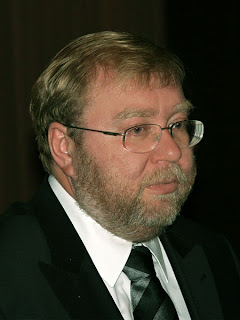 A lot of people who don't know much about Estonia have strong opinions about Mart Laar. A countryman of mine who I am sure has never heard of Kalevipoeg, A.H. Tammsaare or Tõnis Mägi called him: “one of the greatest men alive.”

An anonymous poster on the Laar's own blog recently called him: “a right wing pig!” The poster went on to blame Laar for the economic crisis not just in Estonia, but in the whole world.

In a way it's a backhanded compliment. It is hard to imagine this type of expletive being hurled at Saavisar or Ansip by people living abroad. They are local figures. Laar is global, a world class statesman.

As a newspaper editor, I would receive contributions from him. I was truly in awe of him. His opinion pieces were always well written, in excellent English, concise and well argued. His breadth of knowledge was phenomenal.

Now there is talk about Laar heading back to the premiership. President Ilves would like to see a new government.

But the economy is in free fall, worse the ideologies behind many of Laar's reforms, monetarism and liberal economics are under attack. It is a good time to take a fresh look at Laar's achievements and ask what can he do to get us out of the recession?

One cannot understate what Laar accomplished. In conservative and libertarian circles he is seen as the truly begotten son of Margaret Thatcher and Ronald Reagan.

He took the ideas of Milton Friedman and other free markets thinkers and made them a reality.

Laar famously had only read one book on economics when he first took office in 1992, “Free to Choose” by Rose and Milton Friedman, the father of monetarism.

For those of you who might have forgotten, monetarism is the economic theory which says that inflation is always and everywhere a monetary phenomenon.

Milton Friedman argued that governments could not micro-manage the economy by spending and taxing more because people would realise what they are doing and change their behaviour accordingly.

Monetarism's focus was on government controlling the money supply to stabilise the economy. Ben Bernanke the current chairman of the Federal Reserve and a leading monetarist famously remarked that the way to prevent prices from falling was to throw money out of a helicopter.

For years monetarist thinking has shaped the way the central banks and world major economics operate.

Monetarism Laar-style meant allowing banks, that have been corrupted by organised crime in the 90's, to collapse. It meant total privatisation even of the utilities. It meant weakening the power of trade unions, former communists and other interventionist thinkers. Most of all, it meant a flat tax system. The flat-tax system has been widely copied across Eastern Europe and by individual states in the U.S. and Canada. This part of Laar's legacy will survive.

But Laarism, if I can coin a term, has always meant much more than just monetarism.

Laar like other liberal or libertarian thinkers is also a fan of the laissez-faire economic thinking of F.A. Hayek, noble prize winning Austrian school economist. Austrian school economists believe that human decision making is too complex for mathematical modeling and government intervention is always bad, the best that government can do is maintain the rule of law, that is all.

The problem for Laar is that everywhere laissez faire and libertarian economic thinking is in deep trouble.

Voters and policy makers are rejecting it. In the United States, Obama was elected on a tax and spend, anti-monetarist ticket.

Now the US government is running around like the proverbial headless chicken, raising vast sums of tax payer’s money to bailout banks and then spending the money to nationalise a car manufacturer.

In Britain too banks have been nationalised.

In Estonia and Latvia slashing public spending in a vain attempt to balance budgets is the very type of messing about with fiscal policy that monetarists warn against.

In a wider sense the central monetarist concept, money supply is correlated to inflation, is held in contempt by many mainstream economists and is out of favour on university campuses.

The reality is interest rates are set in Frankfurt and banks are owned by the Swedes, which means there is very little wriggle room for any government in terms of monetary policy.

But that's not the real problem for Laar. The real problem is that the Austrian school economists and monetarists do not agree on how to deal with this current crisis. Just as they didn't agree on the causes of the Great Depression.

Monetarist say the problem now is lack of liquidity in the credit system and a contraction in the money supply.

Monetarist argue that had the U.S. Federal Reserve stepped in to save the banks back then in the 30's the Depression would not have happened. That is why there is a bank bail-out in the U.S. Bernanke, remember, is a leading monetarist.

Austrian School economists say the opposite. They argue it was the expansion of money supply and the cheap credit in the 20's, that caused the Depression in the first place. They say it is a myth that Fed didn't try to prop up the banks in the 30's. They say that government should allow failed banks and companies to go out of business. They say pumping money into the system is just going to make things worse by creating an inflationary bubble

According to Schiff and others from the Austrian School, a recession is inevitable and the only thing that governments can do is allow the free market to correct the situation.

So it's all very well for Laar to talk about liberalism and the free market but the two schools of thought that Laar subscribes to hold diametrically opposed positions. It leads one to wonder, where does he stand? What will he do?

Laar was asked this question on Baltic Business News Forum.

“I suggest looking at Friedman's writing on the Great Depression, which was not created by the collapse of the Wall Street, but by mistakes done by governments after this. Looking on the situation now it looks that the World is only repeating mistakes done then,” he said

This is not a helpful answer. It is not clear whether Laar agrees with the Austrian School or with Friedman.

What is clear is that Laar is in a bind. If he is truly a believer in the free market he would go to the people and say: “Look, if I get back into power, I will do nothing... doing something will only make the situation worse, we must take the pain.”

But even though this might be the right thing to say, it's pretty certain he won't say that. People expect politicians to be like plumbers, they want them to fix things. No politician will go to the people and say “let do. (Let it be).” But isn't that the meaning of laissez faire?